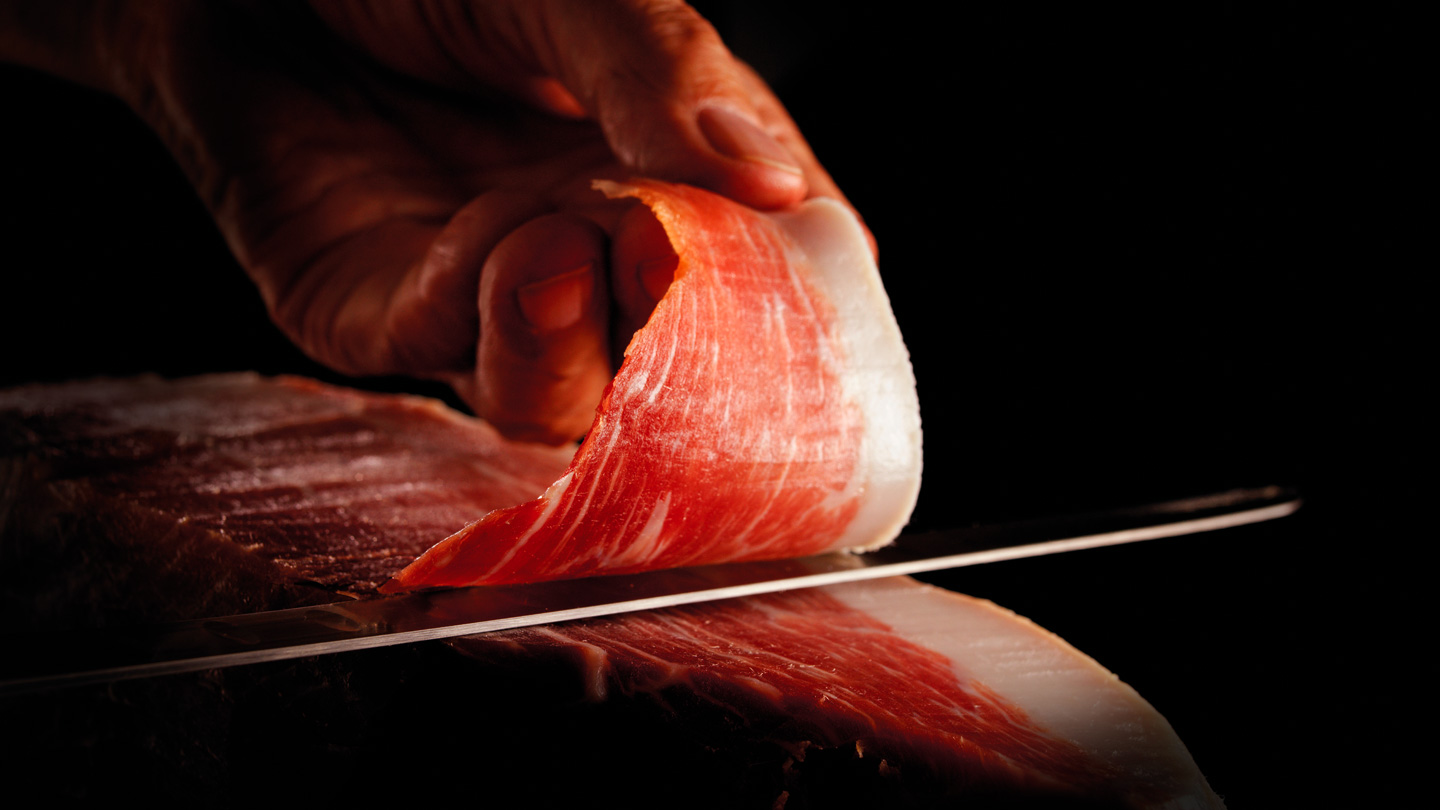 Prosciutto di San Daniele has a balanced and perfect flavour.
Here are some suggestions for slicing and storing it even at home, for maximum enjoyment of its qualities.

The art of slicing prosciutto

Every Prosciutto di San Daniele requires a long, meticulous process to guarantee the flavour that makes it unique and unmistakable. And then what? Even at home, there are certain rules to help you fully savour it. 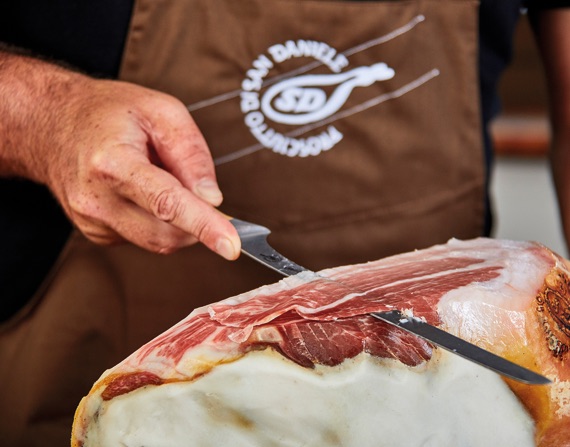 Use the short knife to remove the rind, the “stucco” and the haunch bone. It is important to remove only as much rind as is strictly necessary, so that the remaining product will be preserved better. More of the rind can then be removed each time you start carving the ham again (progressive removal). Secure the ham into the carving stand, positioning it with the part from which you have already removed the rind upwards. Start carving, always using both hands, one to grasp the carving knife and the other the carving fork. This will enable you to balance your body correctly while carving. The movement of the cut must proceed from right to left (or in the opposite direction for the left-handed), applying a slight “sawing” movement and engaging the whole length of the knife blade, taking care not to press too hard. The thickness of the slices can vary depending on individual tastes. Continue carving until you reach the ham bone, removing the rind and stucco progressively. Once you reach the bone, turn the ham over so that the leaner side is facing upwards, secure it onto the stand again, then continue carving on this side. 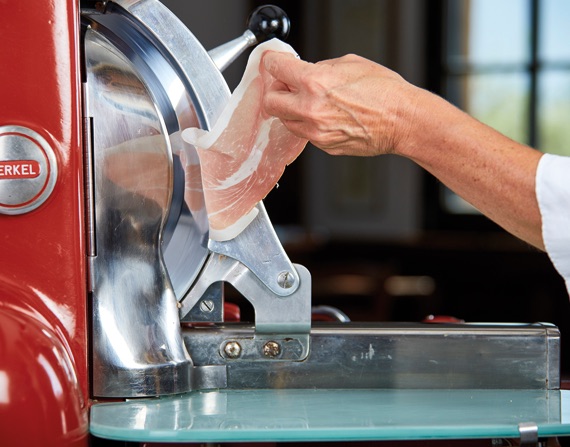 – a hand or electric slicer

– a sturdy short-bladed knife for removing the rind

Method
After removing the ham from its vacuum pack, dry it (using paper or a clean cloth) to eliminate the thin greasy film from the surface. Remove the rind from the “fiocco”, which is the leanest and driest part, only in the area intended to be sliced. At this stage it is important not to remove too much of the fat below the rind. This is because in addition to protecting the ham, the fat enhances the way in which the typical flavours and aromas of San Daniele ham are released. Position the ham on the slicer in such a way that the fat surrounding the flesh is uppermost, while the pinkish-red muscle rests on the plate of the slicer. Start cutting. Each time the blade of the slicer reaches the part covered with rind, repeat the process. Slice the whole “fiocco”, then turn the ham round (back to front) and resume cutting from the butt end. The part covered by the surrounding fat must always face uppermost. It is advisable to machine-slice ham after cooling it for a suitable time, so as to make it easier for the slicer to cut the slices sharply.

How to store prosciutto

Over the centuries, our mission has always been to maintain the flavour of San Daniele. Here’s how to properly store it at home. 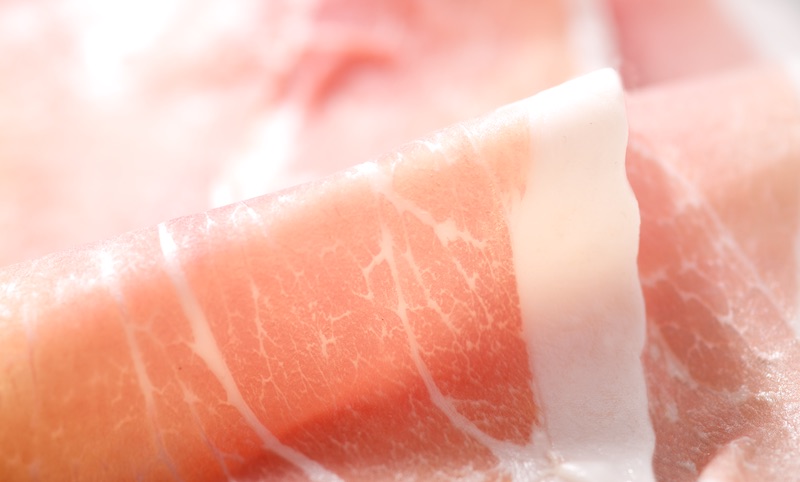 Sliced on the delicatessen counter

To enhance enjoyment of prosciutto sliced on the delicatessen counter, it is recommended that it is consumed at once, one or two hours after purchase and at any rate within 12 hours, keeping it in the fridge in the meantime at a temperature between +1°C and +7°C. 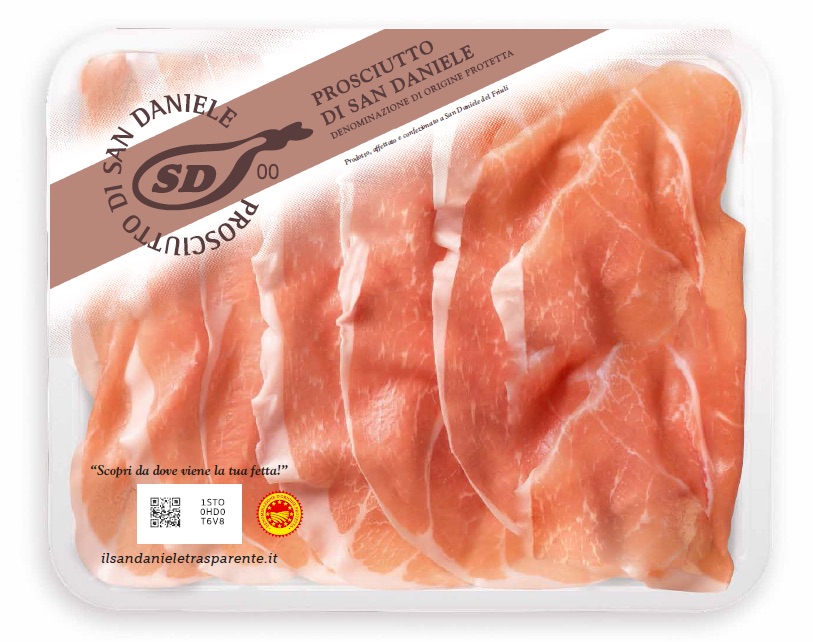 These packs are kept in the fridge, at a temperature between +1°C and +7°C and opened 5/10 minutes prior to consumption.

The maximum storage time for sealed trays kept in the fridge – always shown on the packaging – is 120 days. 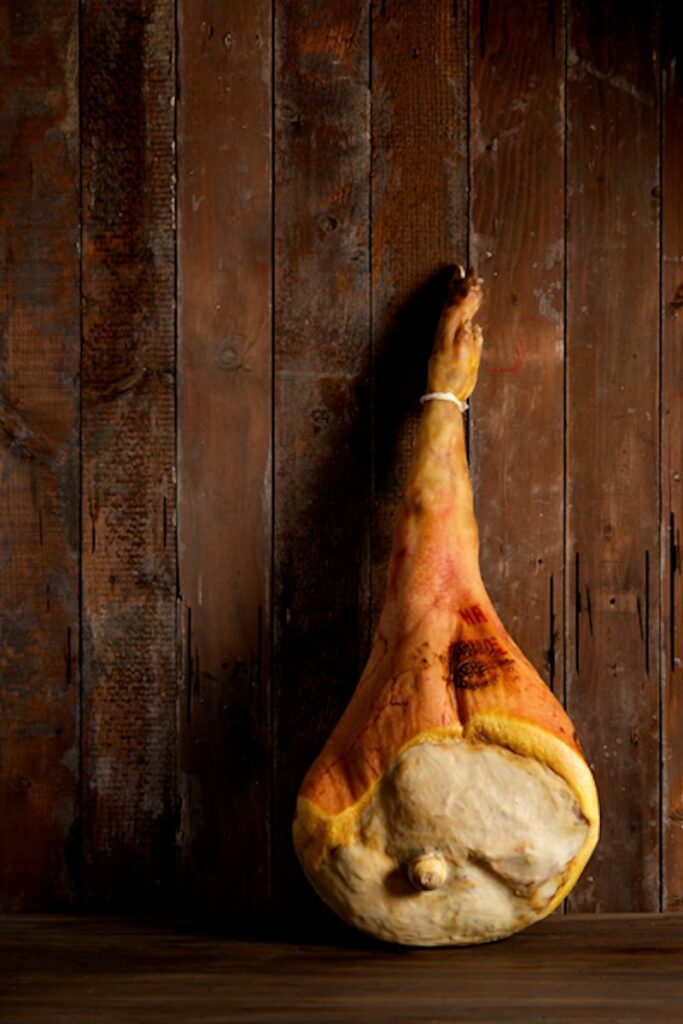 Whole on the bone

The prosciutto must be kept in a cool, dry place (or at room temperature, from 15 to 20 °C) until use. After the prosciutto has been sliced, the exposed part must be covered with transparent film and the product replaced in the fridge. 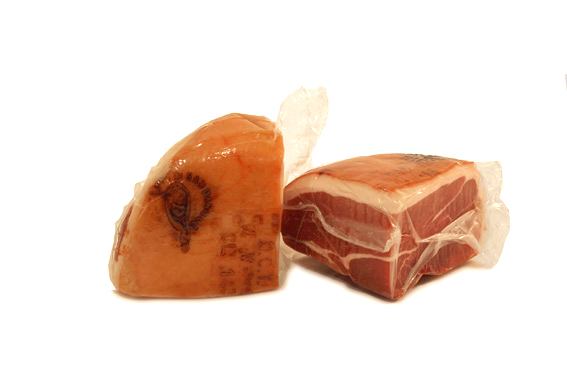 Deboned whole or in portions

After removing the prosciutto from the vacuum packaging, you must:

The ideal would be to divide the deboned prosciutto into two or three portions and vacuum-pack these. The use of vacuum allows the fragrance of the prosciuto to be preserved for longer. It is important to always discard the first outer slice before continuing to slice the prosciutto.

In June 2019, we implemented a digital tracing system which is applied to each pack of pre-sliced prosciutto, enabling consumers to access an immediate, easy-to-use tool which allows them to discover the details of the production chain. Each pack has a unique QR code, which allows consumers to access a range of certified information about the origin of their product via smartphone:

Prosciutto di San Daniele has its own vocabulary. Here are some of our most important words. 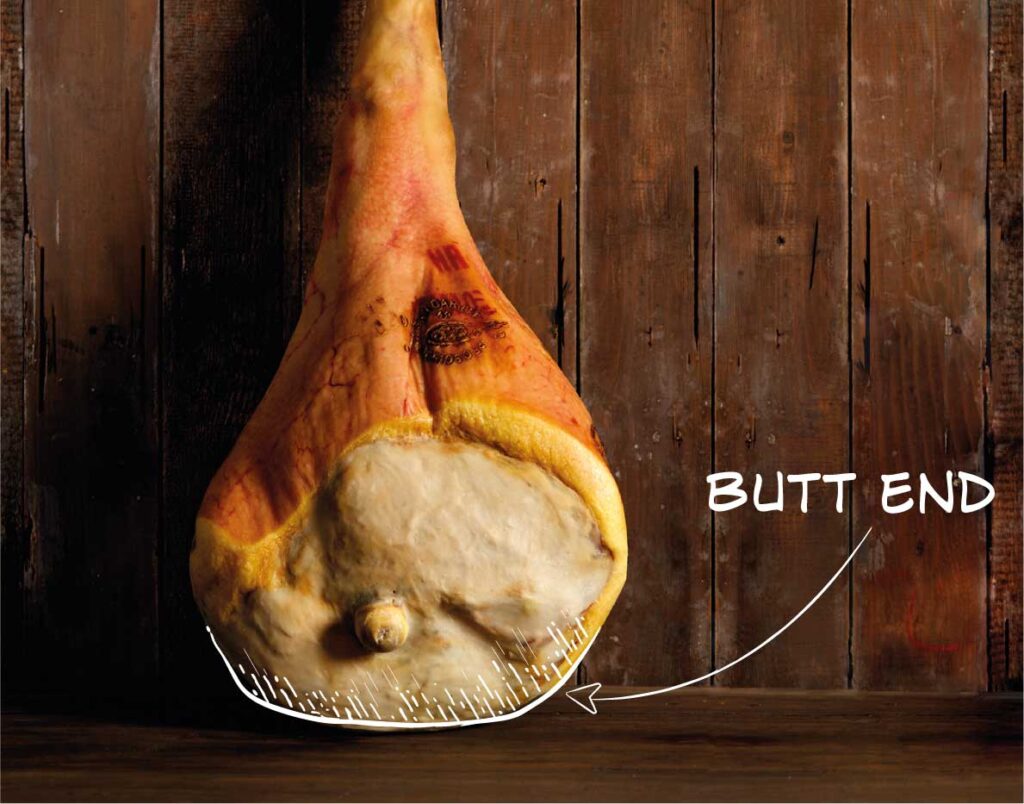 The part of the prosciutto at the end opposite to the shank. 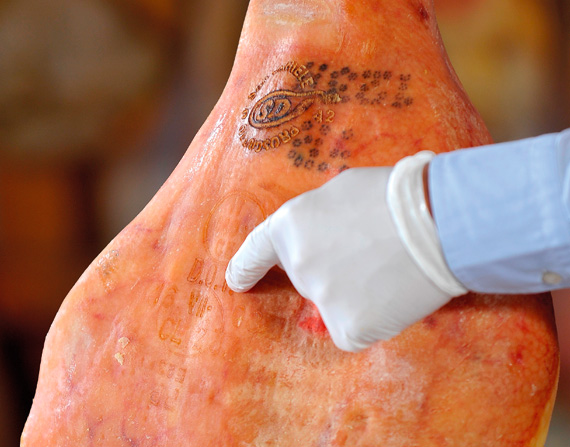 This is the date processing began. It can be found on every whole leg of Prosciutto San Daniele: it is affixed when the leg arrives from the slaughterhouse and makes it possible to precisely calculate the duration of maturation. 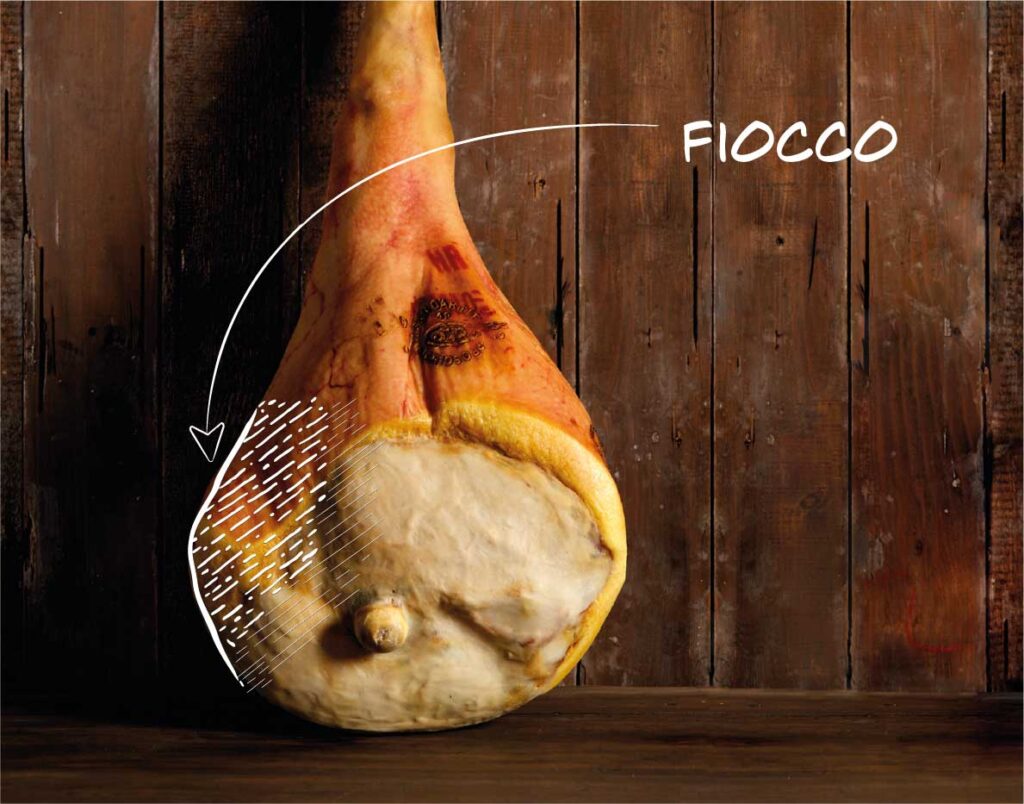 Part of the prosciutto opposite to the rump 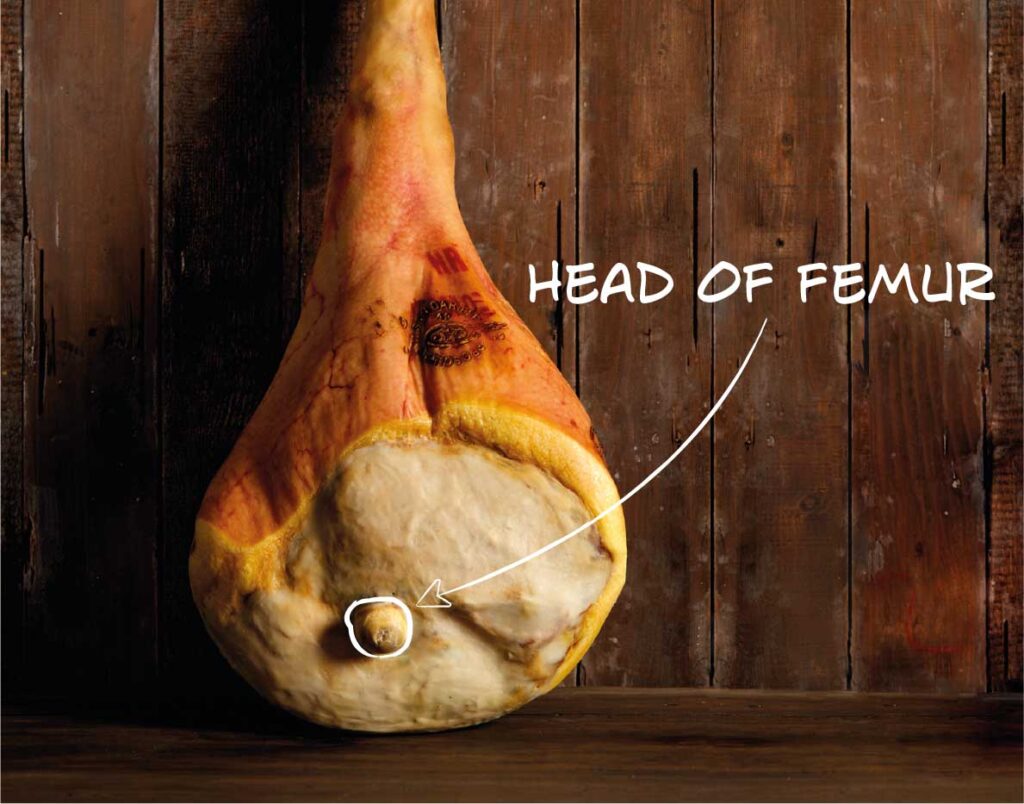 Head of the femur

Round-shaped end of bone protruding from that part of the prosciutto not covered by the rind. 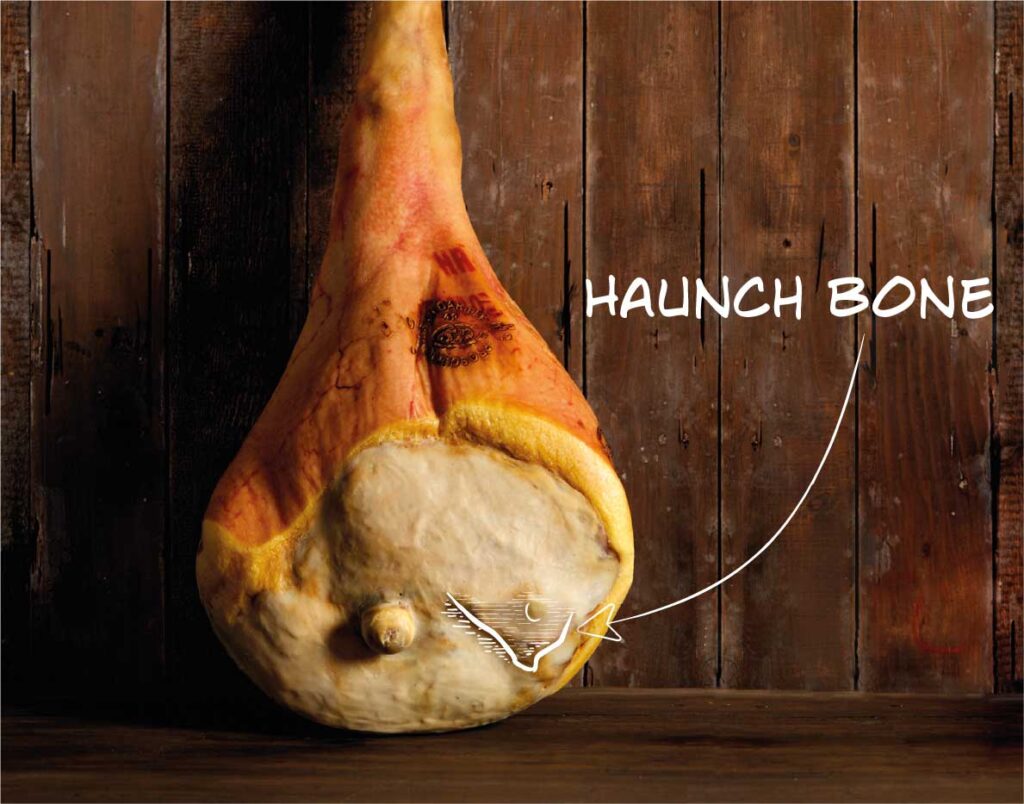 That part of the hip bone that is visible where the prosciutto is not covered by the rind. 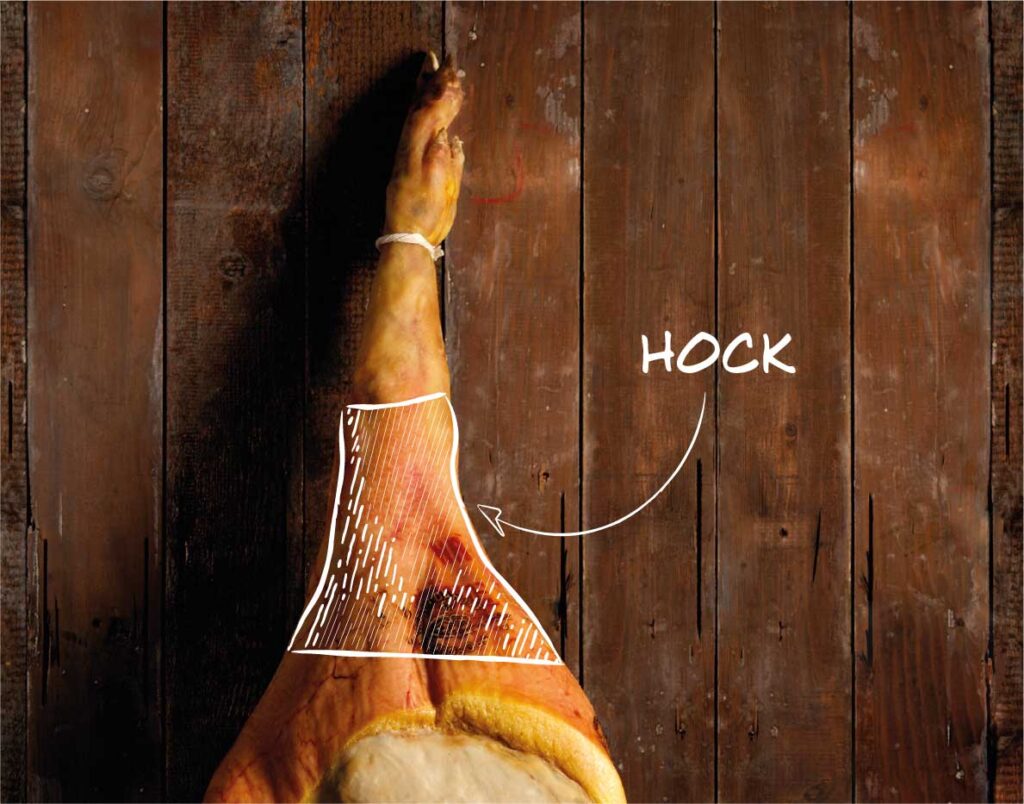 The narrowest part of the prosciutto, excluding the trotter. 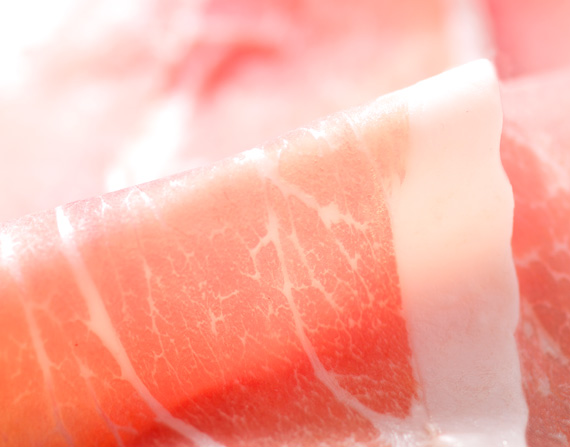 Streaks of intramuscular fat visible in the lean part of the prosciutto. This term does not include the fat surrounding the flesh externally. 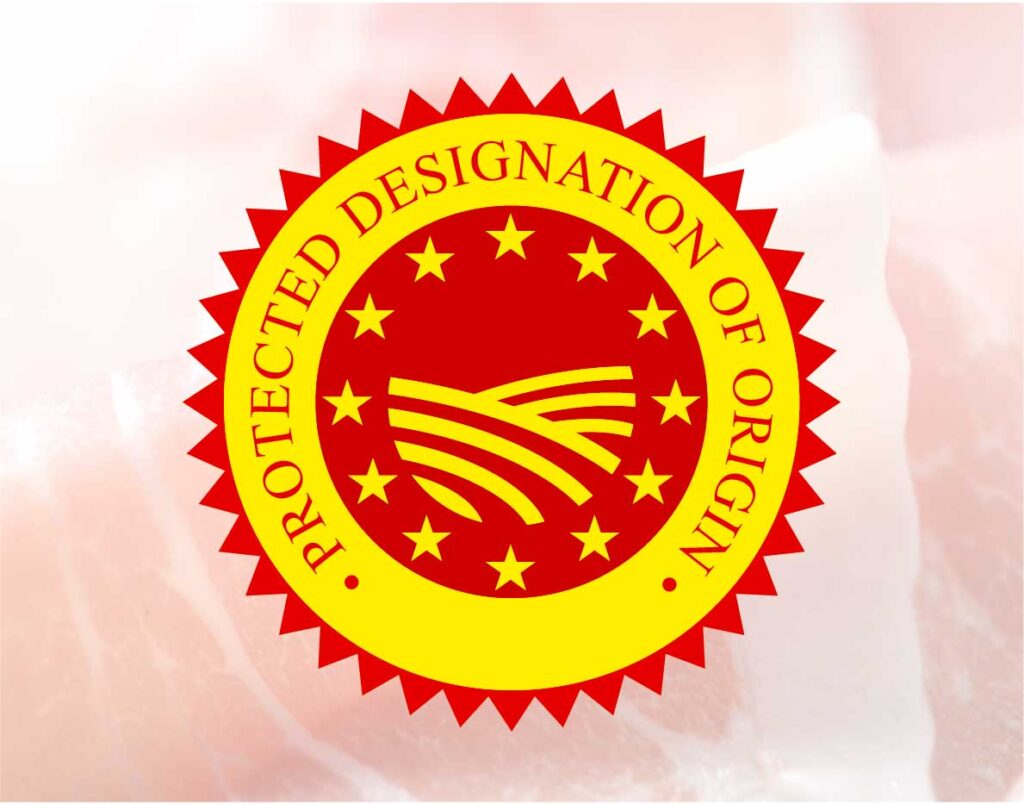 Acronym that stands for Protected Designation of Origin. This mark, granted by the European Union to foods whose distinctive qualities are essentially or exclusively based on the region where they were produced, offers legal protection for their designation. 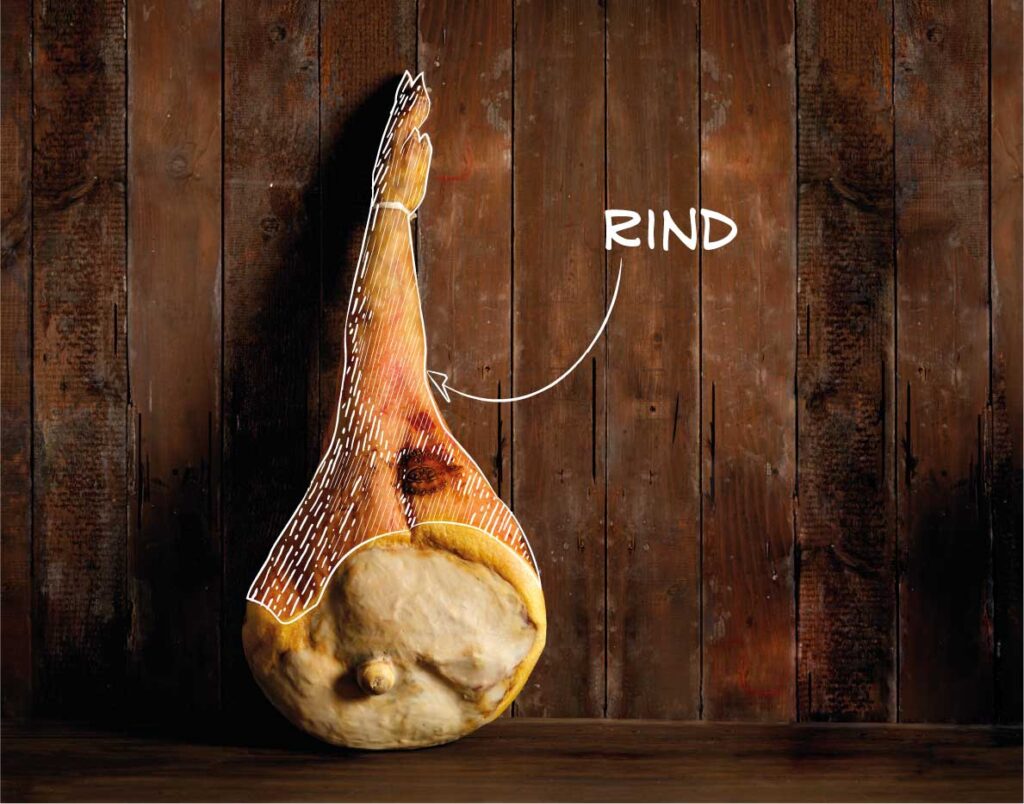 Dried skin of the pig covering the whole leg (with the exception of the cut). After maturing, the rind is dry and compact, and provides natural protection for the product. 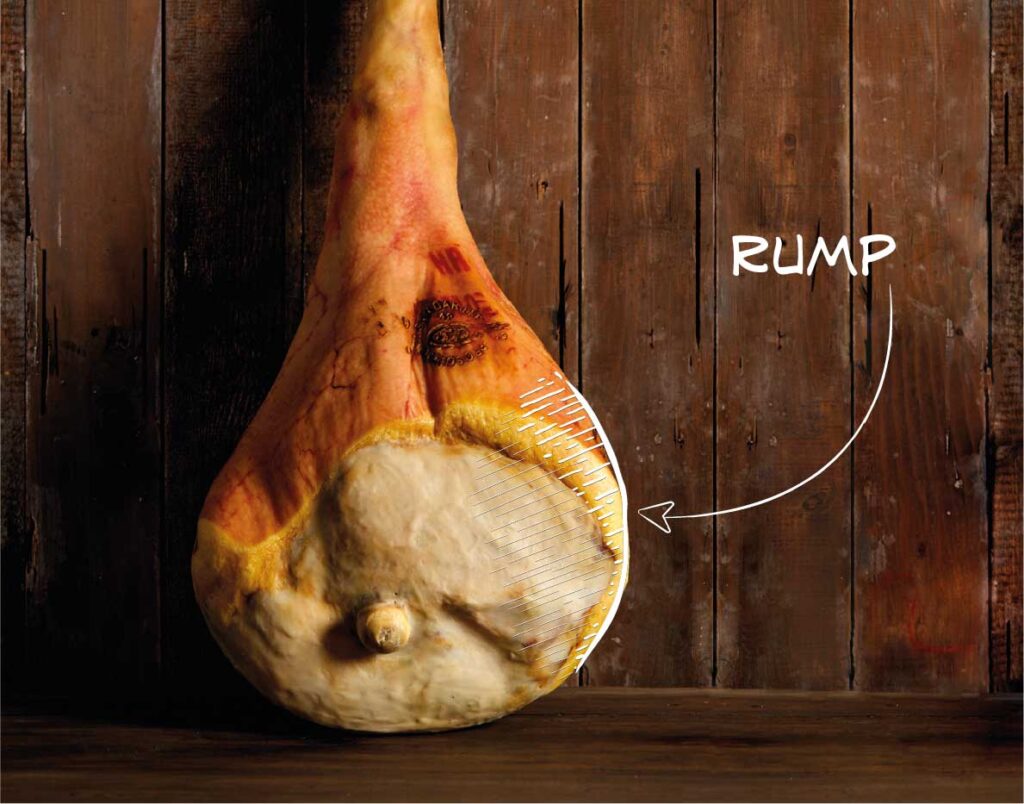 Side of the leg of prosciutto corresponding anatomically to the pig’s buttock. 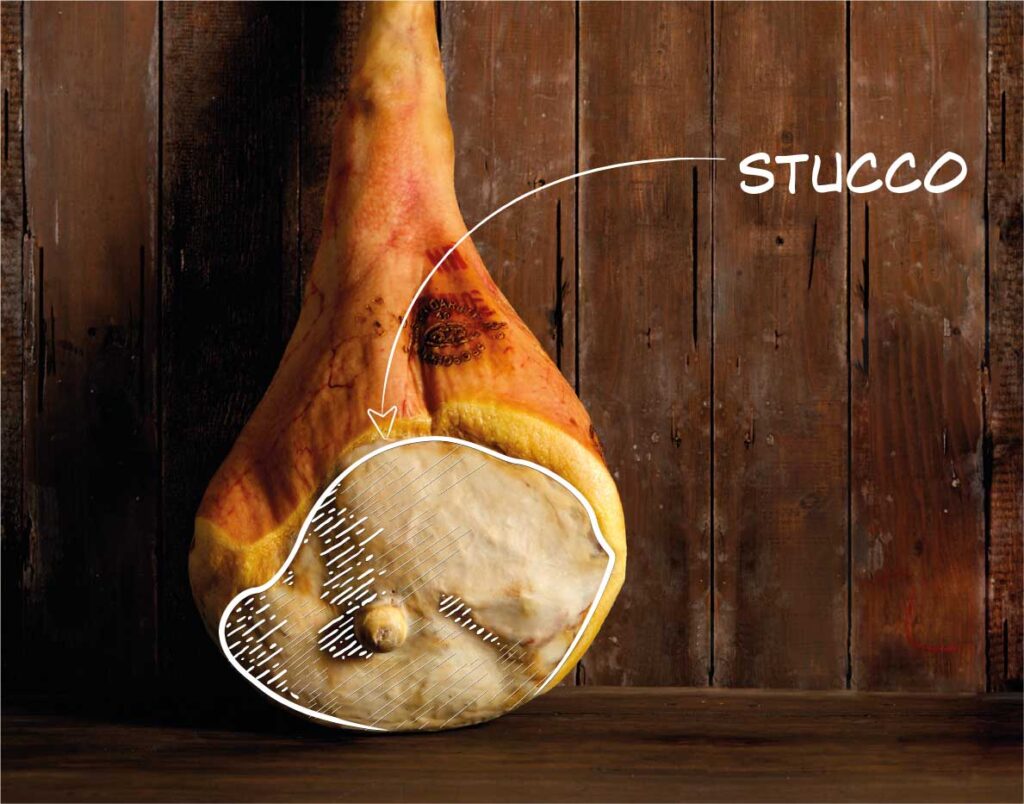 Mixture of lard (pig’s fat), salt, pepper and cereal derivatives (flour). It is applied towards the end of the maturing stage to that part of the prosciutto that is not covered by the rind, in order to protect it. 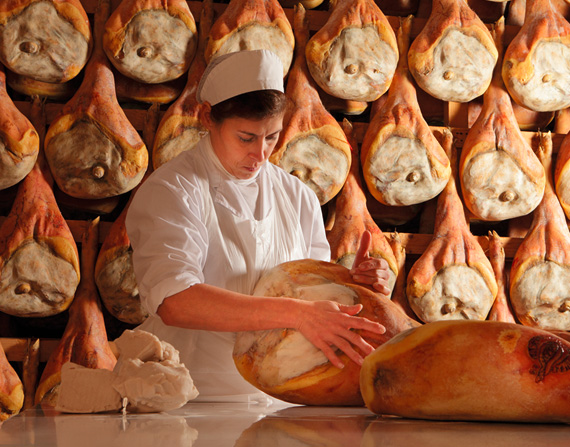 See “stucco”. This mixture is similar to “stucco”, but with a smaller proportion of flour. It is applied at the beginning and during the course of the seasoning process to that part of the prosciutto that is not covered by the rind, in order to protect it and, at the same time, to soften it, preventing the underlying flesh from drying out. 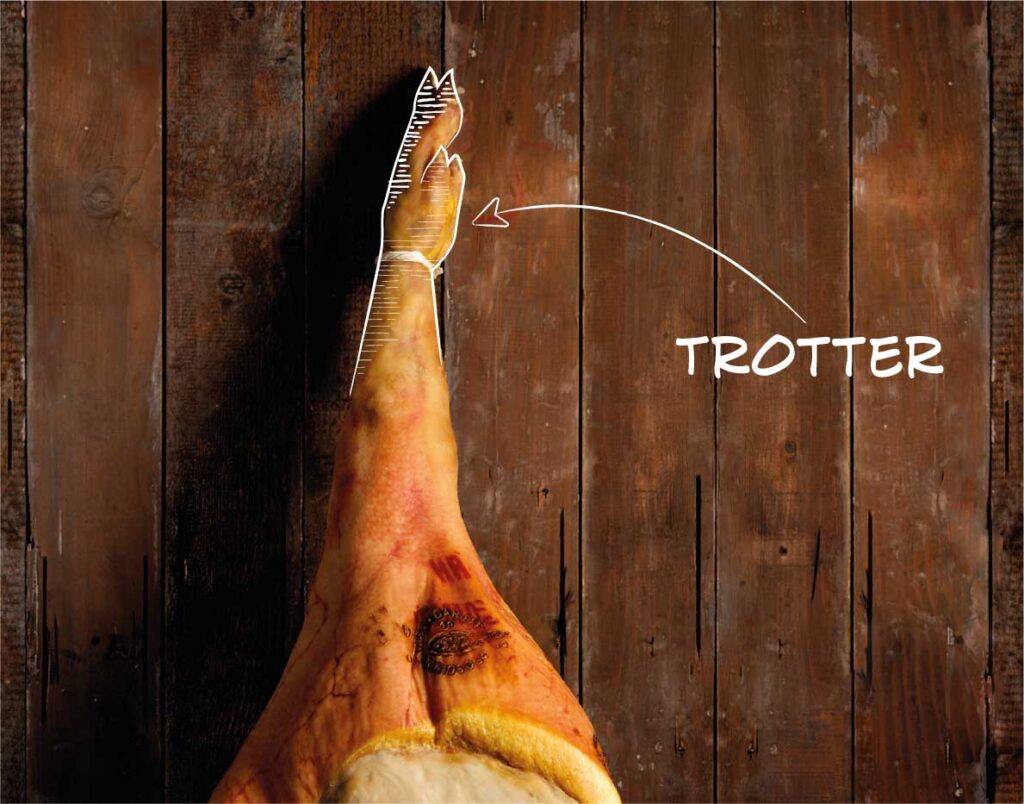